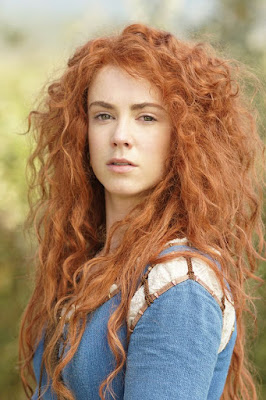 (NOTE: Imogen is not a skilled knife thrower, so if she opts to throw a dagger it’s a 4/DX test, with a -1DX penalty per 10ft thrown. Max range: 45ft)

BACKGROUND: Born and raised on the "wrong side of the street" in Dranning, Idgia was adopted by itinerant potter, Harold, when she was in her late teens and has travelled with him to Bendwyn, where they have made their home for the last few years.

Harold is unaware of Idgia's "criminal" background and the fact that she has kept her skills finely honed.

Idgia recently left home without warning, after seeing a vision of a red haired woman in the streets of Dranning. The woman was calling to her and she has now headed back to the city to pursue this woman that she feels some "connection" with.