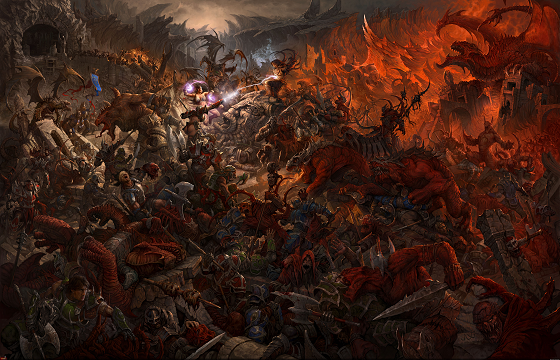 The sky above them had turned red, fireballs were arcing through the firmament, and the roar of demonic monsters rent the air. The glacier had turned to water, leaving the Stellarium of The Vinteralf isolated on an outcropping of rock, flanked by torrents of boiling water.

Cobblethwaite's Companions decided to take a moment to explore the underground complex, beneath the stellarium, that they had found previously but hadn't really looked around propely.

Their explorations unearthed a strange, alien, complex of indescribable machinery, bizarre globes, metallic statues, and dismantled "golems" - all of which reminded them of their expedition to the "storehouse of the gods" out in the Badlands.

They were drawn into a scrappy fight with some small, feral, grey humanoids, where Marigold used the last charge of her Wand Of The Marrow Squid to pull the skeleton out of one; a sight that still sickened some of her comrades, even though they had seen her use this power before.

Then, as the roof was shaking and rubble falling down around their ears, they heard a booming demonic voice calling Kirchin by name.

It was Yuzaru The Barbed Devil that Kirchin has disrespected during the party's trip to Avernus Ridge. He had tracked Kirchin down and wanted his pound of flesh.

The battle against the heroes was brutal, with the devil's animated spikes causing damage whenever our heroes struck the monster, but eventually - although a lot of blood was spilled on both sides - the devil was slain.

Emerging back in the main dome room of the stellarium, where the enormous brass orrery bisected the room, they discovered more of the roof had been torn off and both the colossal Yellow King - his cape now sweeping the peaks of The Gargoyle Mountains and holding the dead corpse of the yellow dragon in one hand - and the terrasaque, a force of nature moving over the mountains towards the stellarium, were visible. 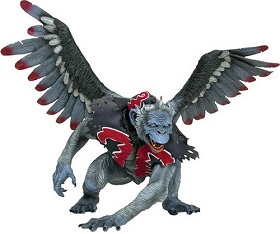 Inspired by the engraved wooden book they had found, which appeared to show the fate of the wielder of The Gauntlet Of Angelus, Harry headed for the ladder up to the mechanical structure, feeling that he needed to be elevated to activate the artefact... although still not 100 per cent sure what it did.

One of the flying monkeys went for Harry, jabbing with his trident, while the others attacked the rest of the party - some jabbing with tridents while others hovered further away and peppered our heroes (Kirchin in particular) with arrows.

[It was kind of at this moment that had this been a film Samuel Barber's Adagio For Strings would have swelled up, and the action would have gone into slo-mo, cluing the audience in to what was coming next.]

Harry, singing a final rousing tune to bring a tear to the eye of his heroic comrades, valiantly thrust his gauntleted hand into the air. He could feel the flames engulf him, but still he sung on as a pillar of light erupted from the gauntlet, fuelled by the fire of his body, and tearing a hole in the fabric of reality.

Harry's singing momentarily transformed into screams, then his angelic voice was silenced forever.

Davian, fallen to one knee, found his final thoughts were memories of his beloved dog (Spot) and he hoped they would soon be reunited.

There was a clatter from the gantry where the Gauntlet of Angelus had dropped to the ground, next to the pile of ashes that had been The Chosen One, Harry Cobblethwaite.

The hole in space and time opened into a white tunnel of light. Rather unexpectedly in the light was a red haired woman, gesturing to them to follow. It was Imogen! And Marigold realised that this was also what Imogen herself had seen in The Nexus Of All Realities, inside the hut of The Witch Of The Woods, some kind of 'future echo' of herself!

[Davian's player, Kevin, played his Plot Twist: Flashbacks card, acquired a looooong time ago (possibly more than two years ago in 'real time') from an encounter with the "memory mist", which served to accelerate the opening of the portal and signal the return of Imogen]

Marigold, battered and blooded, had evaded the flying monkeys and ran towards the tunnel of light as it sank towards the floor of the room.

Davian had died in a heroic final stand with two of the trident-wielding flying creatures.

The brothers Kirchin and Dirkin both ran for the tunnel of light but were cruelly cut down by arrow fire, dropping dead mere feet away from salvation.

Only Marigold made it into the light.

The portal closed behind her.

And Cidri was no more. 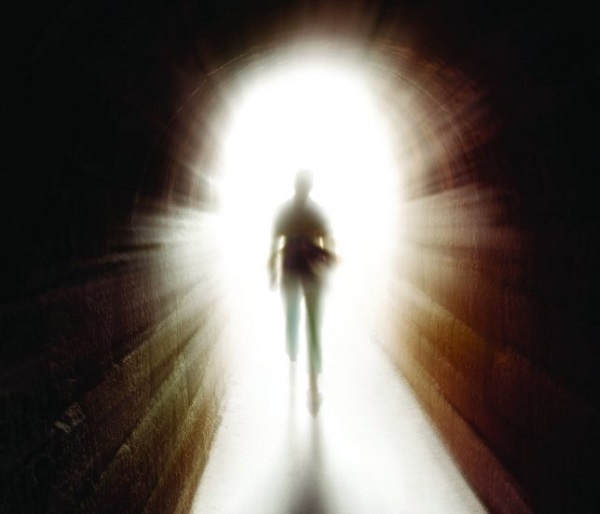 THE END OF EVERYTHING!