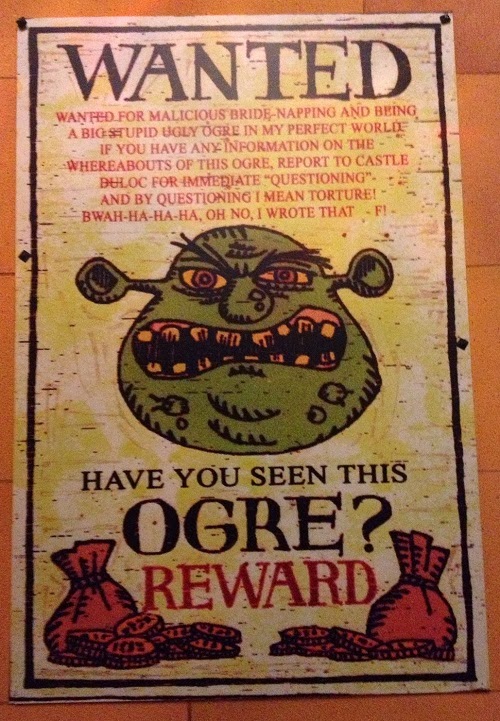 Turns out that our group's celebrity reputation - after our last adventure - isn't restricted to our own town and has spread far and wide.

Not only have we attracted the attention of a travelling halfling bard (Simon's character) who wants to chronicle our exploits in song, but we received a plea for help from a neighbouring town, Dundraville, that was having a spot of bother with an ogre.

At an impromptu council meeting in The Golden Axe, we learned that the ogre had been taking tributes of ale and sheep from the town for years, and the townsfolk were happy to oblige, but it had recently upped its demands to include building materials, gold and finally people. When the villagers objected to the last demand, the ogre - whose name might be Blerg - kidnapped two peasants and returned to his lair in the nearby Skulltop Hillock.

Accompanied by the bard (whose name we either didn't catch or didn't care about), Davian Battlebeard (Kevin), Veriel Whisperwind (Meredith), Kirchin (Pete's GMPC) and I, Peter Entwhistle, wizard extraordinaire,set off to Dundraville.

Dundraville is primarily known as the home of the Berkclay Brothers' Brewery - so we immediately knew how they could repay us for handling their ogre problem - but we also heard tales of ghostly lights in the woods, the disappearance of an itinerant dwarf carpenter and the belief that the ogre was now trying to excavate an ancient warrior's tomb.

After spending the night in Dundraville, we set off at first light towards the nearby hills, aiming to discover a "secret" passageway at the rear of the caves where the ogre lived.

Our first encounter was a dozing hobgoblin shepherd, surrounding by 'his' flock. While Veriel was able to sneak reasonably close to him, the sheep started bleating and he awoke. So we had to take him out.

Although we knocked him unconscious, Davian broke the monster's neck before we could interrogate him. Davian clearly has some anger issues to deal with when it comes to hobgoblins!

Nearby was a foul-smelling narrow passageway through the rocks into the back of the hillock, so we squeezed in - doing our best to tread in as little excrement as possible. Turned out there was a bat cave at the end of the passageway, its floor deep in a guano.

Venturing further in to the cave system, we were prevented from going down one passage by the presence of a giant skunk, but in another direction we found a sealed tomb in which apparently lay the bones of a great dwarf warrior. Davian stripped the corpse of its fine suit of chainmail but then he and Veriel disturbed a slumbering skeleton and were attacked by the undead fiend.

The creature was quickly dispatched, although Davian's new suit of armour helped protect him from taking too much damage.

While we rested - I needed to get my breath back after some spectacular magic use - a couple of fire beetles scuttled in and were promptly dispatched.

Heading on, we came to a large cave, where a couple of other fire beetles were hanging out, but we managed to avoid them and make our way down a long winding corridor that appeared to come to a dead end. Once again, the mighty wizard Entwhistle saved the day and used sorcery to open a secret door into a chamber filled with crates, casks and a hand cart.

We checked these out, then debated where to head next.

And that's where our story ended for the night...

This tale of great derring-do will continue in April and hopefully by then, the townsfolk of Bendwyn will have catalogued all our treasure from our first adventure (I have my eye on the baby dragon skeleton, for my shop, and all the tomes and scrolls - as the only one in our town who can read) and Simon will have come up with a name for his bard!
Scribbled by Tim Knight at 20:46:00