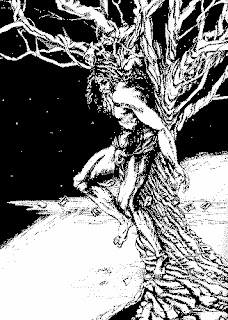 3. Into the Void of Eternal Blackness came Jen, bearing the Seed Of All.

4. The seed he planted in a golden chalice, filled with soil. He watered it with his tears and the seed grew.

It became a tree.

5. And around the roots of that tree formed all the lands of Cidri.

But the branches were bare.6.  So Jen climbed into the tree and cut open his arms so that his blood could feed the tree.

And then blossoms appeared and these became all the creatures of the Cidri.

7. Into the sleeping figure of Man did Jen breathe his own essence.

Priests of the Mnoren religion take a wooden cross as their holy symbol to represent The World Tree and its branches, while the elite Knights Of The Temple of Jen Mnoren use a red cross to symbolise the blood their god spilled to create Mankind.

The Temple Knights are the order of paladins that guard The Supreme Temple of Mnoren located at the heart of the fortress-cathedral Kel (capitol of the duchy of Kel in Elyntia) and their priest-king known, the Hierophant.

As well as guarding The Supreme Temple, the Temple Knights are also at the forefront of any conflicts where the Mnoren faithful are fighting against non-believers.

- inscription found in all temples of the Mnoren religion

Reputation, and standing is the currency of the Mnoren religion - as encapsulated in its central tenet (above).

These words, usually in the form of an engraving, form a key part of the decoration of every Mnoren temple.

The religion of Mnoren demands that its followers be the best they can be as that is the only way they will win their place in Ündain - Jen Mnoren's "Palace Of Infinite Rooms" (their equivalent of Heaven, also known The Glorified Way After, Dwarma, Pureland ).

This is also why family plays such a large role in the religion as well, as your family carries on your name and, therefore, your reputation.

In game terms a character's reputation is largely reflected by his actions (and amount of "experience points"). These all contribute when considering if a character is "worthy" of a room in Ündain, alongside the religions's many deities

A warrior is more worthy if he dies in a heroic battle - or has participated in many great battles - while a wizard is worthy if he creates great spells or accumulates incredible magical items in the name of Jen Mnoren The All-Father. A farmer must raise the best crops or breed the best cattle he can, a priest must be as devout as he can and follow the edicts of the Mnoren as closely as possible and so on.