Chapter Twenty-Six: A Brush With Death...


On the road to the Bright River Fort, Holly and Marigold were amazed to see a giant magical wall spanning as far as the eye could see in either direction, holding back the advance of The Yellow King's domain.

Braced before the wall, and clearly weakening from the energy he was channelling into it to maintain the sorcerous construct, was Revoreesh - last surviving member of the Wizard's Conclave.

Struggling with his words, he told the women they must find Peter Entwhistle's map to The Stellarium Of The Vinteralf, as there they would find the one artefact powerful enough to defeat The Yellow King: the Gauntlet Of Angelus.

Returning to Bendwyn, Marigold and Holly told their colleagues what was occurring down the road, then went to Betty Entwhistle for assistance in finding the map.

She helped them dig through her late husband Peter's stacks of books and scrolls, eventually unearthing a journal belonging to his father, Oblidah (a member of Jerrol's illustrious Most Excellent Brethren).

In it they found a map showing the route in The Gargoyle Mountains that would lead them to the Stellarium.

Betty also found an old etching, in another book, of the Gauntlet Of Angelus, a halfling-sized metallic glove with an oval indentation in the back, to hold a mystical 'star stone'.

After a lot of cajoling, the party helped stir Kirchin's "memory"/dream of the location of the "star stone", the sight of which Viktor Volkov had taken as a sign to found Bendwyn.

With the aid of Father Caleb they lifted the top of the chapel's altar and discovered the "star stone" resting there.

When Kirchin picked it up, Viktor Volkov momentarily spoke through him, confirming that this was the key to defeating The Yellow King.

Redmond, the village drayman, loaned the party horses for their trip to the mountains and they set off.

After a stopover in Littlehill, where Harry met some of his cousins, it took The Companions just over four days to reach the foothills, where they left the horses tied up, and made their way along the narrow path that led around the edge of the mountain. 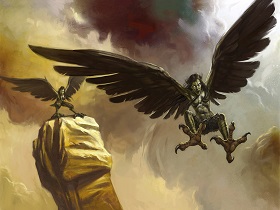 Several hundred feet up, on a narrow ledge (but thankfully roped together), the party were surprised by a brace of harpies, whose hypnotic song mesmerised all save Davian.

Kirchin, having already proven susceptible to mind-control, stepped off the ledge, and became the prime target for one of the bird-women.

The fight went from bad to worse until, eventually, all except for Davian had fallen over the cliff, and the dwarf was bracing himself against the mountain, holding on to the rope that was keeping everyone from plunging to their doom, while fending off the harpy attacks.

Soon a third - the mother harpy - joined the fray and things were looking pretty grim; Kirchin, in particular, was being torn into easily digestible shreds at the bottom of the rope, and Marigold and Dirkin had suffered some vicious attacks themselves.

However, eventually, Davian managed to snap Harry out of the spell and as the fight continued the rest of the party - except for Kirchin - shook off the enchantment and, one by one, were dragged back onto the ledge.

The two younger harpies were slain and the elder flew away to her nest, to lick her wounds.

The bruised, battered, and bleeding adventurers pulled themselves along the narrow path to a cave, which turned out to contain the nest of the younger harpies.

They set up camp for the night, patching up their severe wounds, nursing battered limbs and bruised egos; thanking the Gods for letting them live another day and realising just how close they had gotten to all perishing.

Late in the morning the next day they headed further up the mountain, into the snow, and came to a pass the map told them would lead them to the Stellarium.

In the distance Davian spotted, circling, the same yellow dragon they had seen months earlier - flying overhead - when they had dared to cross The Bright River into the realm of Tanander.

Unnerved by the sight of the dragon, especially in the wake of their near-fatal clash with the harpies, the Companions made their way slowly through the snow-carpeted mountain pass, until they caught their first glimpse of the mythical Stellarium in a valley below them.

As they made plans for their "assault" on the building, Marigold pointed out the, more recent, large hole in the roof of the ancient structure...