Chapter Thirteen: Lost In The Nexus Of All Realities...


Having slain the orc hunting party, our heroes plunged on deeper in to Huldre Forest, drawn by the sound of a running water, and soon came to the bank of river.

There was a narrow stone bridge across the fast-flowing river and on the far side stood a giant of a man, dressed in green armour and sporting a mighty battle axe, who declared that "none shall pass" and that the party needed to send forth its champion to best him in single-combat to earn the right of passage.

Marigold immediately recognised him as the "Green Knight" that guards the boundaries of The Realm Of Faerie.

The party discussed options and eventually settled on Marigold casting 'haste' on Davian so he could take on the giant. 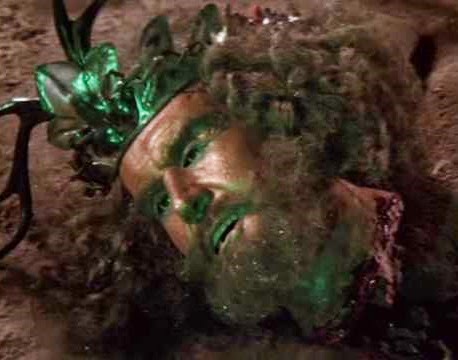 The dwarf waded into furious battle, dropping his own weapon twice as he was so jacked up. The party tried a couple of sneaky moves - Marigold was to cast a web spell on the knight and Imogen wanted to swim across the river and sneak an attack on him, but every time they were thwarted by the magic on the Faerie Realm.

Eventually, after a quite brutal fight, Davian brought the knight to his knees and lopped his head off.

The knight's body, weapons and armour dissolved to leaves and blew away in the wind, leaving only his magical cape that Davian rightfully claimed as the victor.

There was a path here that the adventurers took, eventually being met by a beautiful, radiant woman who introduced herself as Vasilia.

It was her whistling that Davian had heard earlier in the forest - and, in true dwarvish style, he kept grumbling that he had a "bad feeling about this".

However, Vasilia said she was the daughter of the Witch of The Forest and would gladly lead the party to her mother - so the curse on Marigold could be lifted.

Vasilia led the party deeper into the forest, down magical pathways, until they found themselves in a clearing where a hideous crone was waiting outside a small hut - that lacked any doors and windows.

The witch, who referred to herself as Granny, appeared to know who everyone was, welcomed them and then transported them inside her hut - which was obviously bigger inside than out.

While she prepared her potion to lift the curse from Marigold, she told the others to "run along" and not get under her feet, so they climbed the vertigo-inducing stairs to explore further inside her strange hut.

Opening a door they immediately found themselves on a benighted street in Dranning, the region's capitol, and ahead of them a red-haired woman was calling out "Imogen, come to me" as she disappeared round a corner.

And so began a surreal chase through different planes of existence, and even through time, as every door the group opened appeared to take them somewhere totally alien and random. At different times they found themselves on sailing ships (one, crewed by mysterious luminous beings, was even in outer space), on rooftops, in orcish kitchens etc

At one point they even stepped back in to The Broken Blade tavern in Bendwyn - much to shock of Sir Browyrd, who was still holding court there - before disappearing through a portal that no one else in the tavern could see.

Imogen caught a glimpse of a creepy baby in a cot in one room and passed out from the horror and just as the group was starting to feel as though they were all going insane (they were in a particularly alien, spherical room where a floating cube was suspended in a sparkling beam of light, and had opened a door on one side of the room to see themselves - from the back - on the other side of the room!) they found the passage back to the main room of the witch's hut.

While they had been away, Granny had summoned the ghost of Mardrid The Gentleman Bandit, admonished him in an unknown tongue, and then banished him.

She then brewed a powerful concoction for Marigold to drink. This, the witch said, would remove the curse and when Marigold checked she noticed the 'mark of The Yellow King' had disappeared from her skin.

The reunited group was then transported back outside the hut and sent on their way.

Imogen did some scouting ahead and (using a spyglass retrieved from one of the sailing ships the group had visited while 'in the witch's hut') saw a mass gathering of orcs, a war camp, on this side of the river, heckling the fort on the far side.

She also noticed that one of the orc banners was topped by the head of Tarl, the group's guide.

Unwilling to take on the orc army our heroes followed the river south-east, until they came to the ford by the ruined tower where they had found Margesh weeks earlier.

They crossed the river and made their way towards Bendwyn. This detour had taken almost a fortnight, rations had run out and the group were weak and hungry by the time they arrived at Kirchin's Temple Of The Lady Of Healing on the outskirts of the town... only to find that it had been ransacked.

Kahl, Kirchin's apprentice, had taken a beating in defence of the healing house but told his master that Sir Browyrd, Margesh Blackblood and Sir Browyrd's men had broken in, stolen the Sword Of Aquin and all Kirchin's silver and then left the town.

Meanwhile, in the town, our heroes learned that the orcs hadn't yet crossed The Bright River, but their numbers were swelling. At last estimation there were now several thousand poised on the far bank, waiting to invade...
Scribbled by Tim Knight at 12:52:00