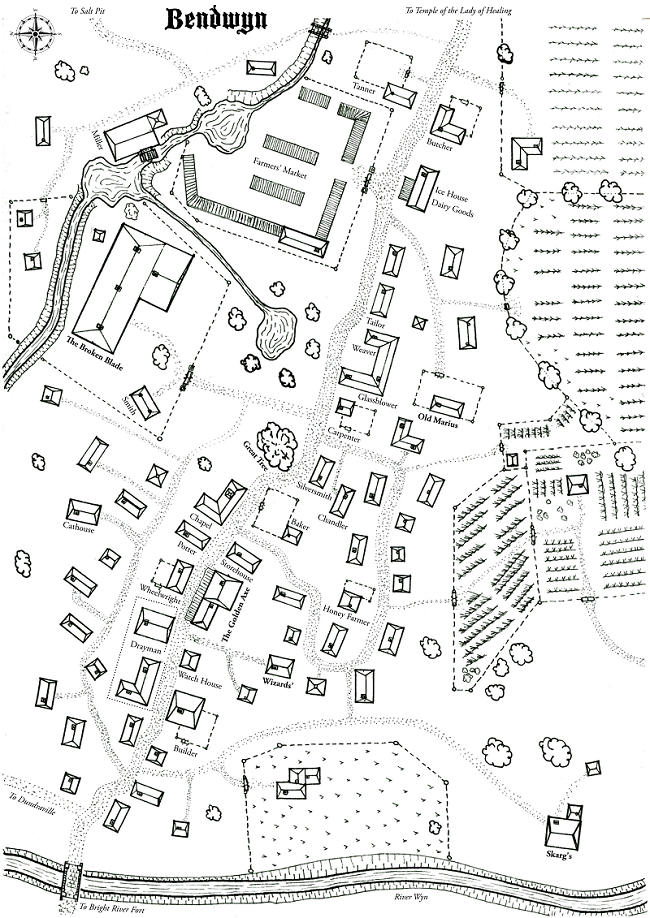 (A larger version of this map can be downloaded from here)

Bendwyn (population: approximately 400) is a rural town in The Duchy of Dran, Southern Elyntia.

Most of its people were born there and will probably live out their lives there. What little excitement the town sees comes mostly from travellers. Bendwyn lies just a little north of the Bright River, on its tributary (The River Wyn) and an old road connecting Rubydelve with the river road — thus, it sees its share of strangers.


Its population is predominately human, with a  large contingent of dwarves (because of the Rubydelve connection) and a few halflings from Littlehill. Every now and again an elf is spotted in the town, although the last one - Veriel Whisperwind - recently died in an encounter with an ogre.

Most of Bendwyn's shops and businesses are laid out along the sides of the "main" road (which is really no more than a wagon-trail which barely shows up on a map of the duchy).

Set back from the road, behind the shops, are rows of houses along little lanes. The first buildings were built close together for protection - later ones were constructed wherever it
seemed convenient.

Points of interest include:

The Broken Blade: A rather good inn and tavern, certainly the largest in town. Its proprietor is Murad Wallholder. He is honest and loyal to the Duke.

Lodging at the Broken Blade will cost $12 per night for the best in the house, down to $3 for stew and a pallet in the common room; horses $2 extra, but they'll be well taken care of. The bouncer is One-armed Bill.

The Chapel Of The Mnoren: One of the oldest buildings in the village, it contains an altar stone dedicated by the legendary warrior-priest Viktor Volkov.

The current priest is Father Caleb, who trained at one of the many seminaries in Kel before coming to Bendwyn almost five years ago.


Enwhistle's - the local 'magic shop': Actually, it's hardly a "shop", it's home to the late Peter Entwhistle, his widow Betty and their two children, Logan (10) and Kitty (8).

Peter has an extensive library of books (being the only literate person in Bendwyn), the majority are about magic and lore (rather than being books of magic).

There is almost no "treasure" in this house — children are expensive to feed, and they don't charge much for their services (except to travellers who seem to have a lot of money. Then Peter gets greedy.)


Peter's former young apprentice (more of skivvy to help keep the house clean and the children fed) was Marigold Weaver - daughter of the town's weaver, Dennis - who is slowly learning the ways of magic.

The Farmers' Market: an area of stalls and stables, where produce, meat, and livestock are sold.

The Golden Axe: A tavern catering mostly to dwarves, but open to all as this is where the town council meets. The tavern serves the best food in town as well as ale from Berkley Brothers' Brewery in Dundraville.

The proprietor is Gunther Treszhnak. Gunther is widely travelled and can be a good source of information about strange places. Gold helps.

The resident entertainment is a halfling bard called Harry Cobblethwaite.

She used to be assisted by her young niece Holly and the elf Veriel Whisperwind.

But Veriel went off and got herself killed earlier this year on some foolish escapade with the town council and now Holly has left her aunt's employ to take up a part-time position as a nurse at The Temple Of Our Lady Of Healing.

Marius - the home of the local miser: Old Marius is reputed to have a lot of money.

The cloaked and shuffling form of Old Marius is rarely seen out and about, as he tends to rely on his servants to obtain food and any other necessities.

Though old and getting weak, Marius is not senile except for his "hoarding" quirk.

He is generally regarded as "cunning" by the people of Bendwyn - as well as lucky. He's foiled four thieves in the past three years.

Potter: Harold The Potter has run this establishment for many years with the assistance of his young daughter Imogen. Imogen recently left home, without explanation, and Harold is heartbroken.


The Salt Pit: A small salt mine just outside of the town, providing the community with all the salt it needs.

A one-man operation run by the rather sickly Paco, who lives in a small homestead adjacent to the mine with his wife, Gwenneth, and their two young children (Owen, 4, and Pip, 3)


Skarg's: A rather sleazy tavern. Skarg is a half-orc, and not especially honest — but he knows enough to stay out of trouble.

His establishment is set on the outskirts of town, so the noise doesn't bother honest folk.

Skarg has rooms to rent; they're very cheap, but watch your valuables!

This is a good place to go to get in a fight, pick up rumors, or buy really cheap liquor.


The Smithy: operated by the dwarf  Davian Battlebeard.

Temple Of The Lady Of Healing: Just outside of town sits this old building which is currently being refurbished by recent arrivals in Bendwyn Kirchin and his young apprentice Kahl. It operates as a healing centre for locals and travellers.

Holly, the niece of the town's honey farmer Gwendolyn, works here part-time as a nurse.

The Watch House: This is the headquarters of the local guard (such as it is — four men), complete with one-cell jail. The guard-sergeant is Max Beerfoam, who previously served at The Bright River Fort.

There is an enormous gong outside the watch-house. It is used to call the people to arms in case of trouble, to warn of fire, etc.

Striking the gong unnecessarily is a severe offence, punishable by a working-over by the guard, a stay in jail, or a heavy fine — depending on who did it.

BRIGHT RIVER FORT
The road leading north-west out of Bendwyn heads towards Bright River and The Bright River Fort, which is a couple of hours' walk away (about seven or eight miles).

The fort, manned by a 100-strong company of The Duke's finest men under the command of Captain Dexter Hammerhand, and with its own system of moats for added protection, stands vigil over the narrowest part of the Bright River which separates Southern Elyntia from the wild orc lands of Tanander.