With the ogres dead, our heroes quickly found the hidden room where their quarry - the elusive bandit leader Margesh Blackblood - was hiding.

The charming outlaw endeavoured to open negotiations, but the fiery-tempered dwarf Davian Battlebeard was having none of it and attacked, backed up by the magical webs of young wizard-in-training Marigold Weaver. Blackblood shrugged off a couple of Marigold's treacherous webs and gave a dazzling demonstration of his swordsmanship, landing a powerful blow on Davian while almost simultaneously disarming the sneaky Imogen (whose twin daggers of death had come into play).

He was, however, soon overpowered and bound in ropes by our canny heroes. Marigold used her staff to bludgeon Margesh unconscious. He was then stripped of his possessions and secured across the back of the group's mule, Charles.

Kirchin, the only skilled swordsman in the group, took possession of Margesh's fabled Sword Of Aquin (for safekeeping), before the group headed off back through the forest towards Horst, a village they planned to avoid because it was a hideout for Margesh's band of ruffians, on their route back to Bendwyn.

As they approached the tree with the word Croatoan carved on it, that marked the start of the narrow trail back towards the "hellmouth" crypt they had explored days earlier, they discovered three corpses across the path - two men (no good ruffians, by the look of it) and a bound-and-gagged peasant woman.

A trail of blood led away from the site along the same path the party was taking, so they investigated only to find themselves back at the murder site. Although this time the woman's corpse had disappeared.

Perplexed, they carried on and again found themselves back at the murder site, although this time the woman's corpse had returned and one of the dead thugs now looked suspiciously like Kirchin!

Pressing on, our heroes found themselves once more approaching the murder site - only this time the murder seemed to be in progress and the path was blocked by a gigantic bear of a man, with bulging eyes and a frothing mouth, swinging an enormous axe.

Kirchin fired an arrow at the berserker, alerting him to the party's presence and he charged them. Marigold zapped him with a magical web, but he kept charging, head-down, like a bull and went crashing into the party.

Kirchin had dropped his bow and drawn the Sword of Aquin and in the ensuing tussle he decapitated the insane murderer.

Davian recognised the dead man as one of the shady folk he had seen the other week in Skarg's bar, back in Bendwyn, and Imogen realised that's where she knew the other two dead men from. The woman's identity remained a mystery.

Harry and Marigold went through the dead man's backpack, finding a stash of adventuring equipment, which the group divvied up, and a coin purse that contained - as well as cash - a crumpled note that Marigold read out aloud: 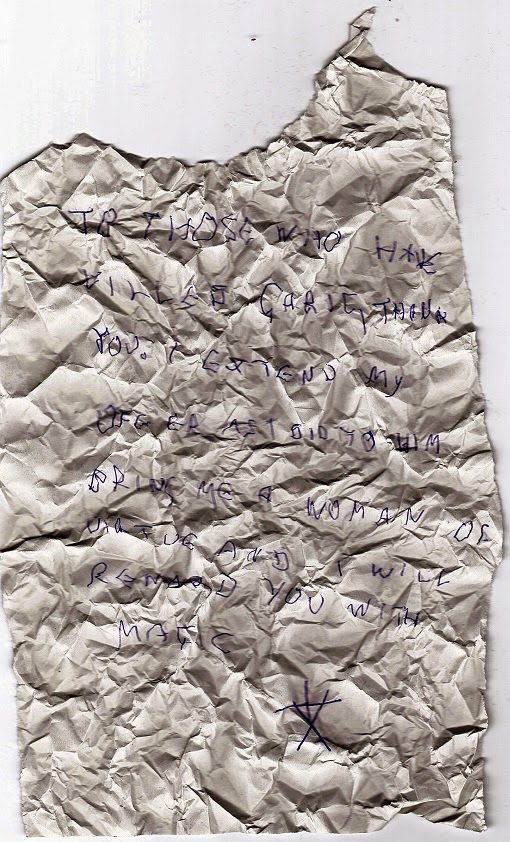 "to those of you who have killed Garig, thank you. I extend my offer to you as I did to him, bring me a woman of virtue and I will reward you with magic"

Although the party had already suspected there was some powerful magic at work here, this confirmed it and Margesh identified the mark at the end of the note as the sign of the legendary "witch of the forest", although he thought she operated in the far south of the Huldre Forest, beyond the Bright River.

It took the group some time, and a diversion to the tomb of Viktor Volkov, to realise they had somehow broken the magic spell - although it wasn't until they got home to Bendwyn and were telling the tale of their adventures that someone recognised Garig as the berserker from his description.

The party made their way out of the forest, heading to Dundraville, where they were warmly welcomed and put up for the night, before finally making it home to Bendwyn.

Sir Browyrd, the duke's agent, had left a message that a runner should be spent to Dranning upon our heroes return with the captured bandit.

Margesh was taken into custody by guard-sergeant Max Beerfoam and locked up in the town watch house, leaving our heroes to catch their breaths, celebrate their triumph and try to return to their normal lives.