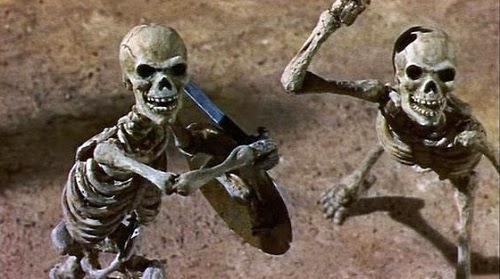 Unfortunately two Tuesday Knight regulars were unable to make the inaugural session of Pete's new campaign last night - Meredith had injured her knee and Simon couldn't get away from work - but Kevin and I were still keen to get things rolling.

Pete began the session by walking us through the basic rules of The Fantasy Trip, particularly the combat (although none of us fully appreciated the difference that rolling 3d6 as opposed to our usual 1d20 would make to the chances of scoring the numbers we actually needed to hit anything).

The adventure began with the calling of an emergency council meeting in the town of Bendwyn (we are all members of the town council).

A physicker called Kirchin, and his young apprentice, had arrived with stories of a ghostly encounter in an abandoned healing house/temple outside the town. We all knew of 'The Temple Of The Lady Of Healing', and how it had lain empty for hundreds of years since a great plague swept through the area. There had been rumours of hauntings, but nothing we took too seriously... until now.

Davian Battlebeard (Kevin's dwarf) and Peter Entwhistle (my mage) suggested returning to the ruins, with Kirchin (who we realised was Pete's GMPC) in daylight to check it out.

The temple itself looked abandoned, as it always had, but Davian discovered a panel in the floor that led down to an ancient crypt where we were attacked by a pair of animated skeletons.

This battle seemed to go on forever and I was getting seriously fatigued by trying - but failing - to do any damage by hurling fireballs at one of these skeletons. Eventually I resorted to simply bashing him with my staff and that seemed to do the trick.

I then turned to help Davian and Kirchin and managed to land a couple of meaty blows with my staff that took out the second skeleton.

Yes, the wizard had, indeed, felled the two undead fiends while his more martial colleagues had flailed around uselessly. But I'm not one to gloat... well, a bit, maybe!

We then retired back upstairs so I could rest and regain my strength - and to give the raging fires I'd started in the crypt time to die out.

Then lurching out of the smoke came a foul-smelling zombie. I magically pushed out back down the stairs, then Davian leapt on top of it and caved its head in with a meaty blow.

We realised there was a dark, mine-like entrance in the far corner of the crypt but instead of investigating decided the best course of action was to seal up the crypt entrance and return to the town to find more able bodies to bulk out our numbers (ie. hope Simon and Meredith can make it to our February game).

The Fantasy Trip turned out to still be the fun system I remembered playing with Pete and Steve back in the '80s - even if I couldn't recall the finer points of the rules until Pete jogged my memory. It took all of us a time to adjust our mind-set to the idea that no-one (us or the bad guys) would necessarily hit all that often, but when a hit was landed it would probably do some serious damage.

Your chances to hit depend on your character's Dexterity - modified by whatever armour he is wearing - and several minutes into our first combat we realised it was a lot harder to roll under eight on 3d6 than it would have been on a 1d20 (the bell curve and all that). And also what a difference even a single point of a statistic can make - Kevin's armoured dwarf had a Dexterity of eight while my wizard had a Dexterity of nine and I was hitting way more than Kevin.

As a wizard I also grokked the idea that my fireballs wouldn't automatically hit and even if they did there was the one embarrassing piece of dice rolling where I managed to do ZERO points of damage (fireballs do 1d6-1 damage per point of Strength you invest in them, I was putting two points into each attack, and then managed to roll two ones on my damage, which, of course, meant no damage!)

But this also encouraged me to get creative, using my "drop weapon" spell on one of the skeletons and then telekinetically pushing the zombie down the stairs.

Already excited about next month's game.
Scribbled by Tim Knight at 20:43:00