Chapter Fourteen: I Ain't Afraid Of No Ghost...


After their mind-boggling adventure in the insanity of the Realm Of The Faerie, Kirchin, Davian and Harry were plagued by strange dreams.

Kirchin was walking the battlefields of his youth, searching for the wounded; Harry realised the man he thought was his father was in fact a cruel slavemaster running an illicit 'cobbling mill', that Harry had torched when making his escape; and Davian remembered a guard dog he had been fond of his youth that had given its life to alert his tribe of an impending orc raid.

Kirchin awoke to himself in the town's chapel, collapsed over the altar with no recollection of how he got there from his bed in the healing house!

Later that day, when the three heroes were dining at The Golden Axe, a young woman burst in and headed straight towards Kirchin.

It was Dayl, a barmaid at The Merry Riot in Dundraville, one of the women the group had rescued from the ogre a month or so earlier.

She explained that one of the sons of Bothwell, the landlord and her emploer, had disappeared and she feared that the ogre had returned.

Kirchin, Davian and Harry agreed to come and help in the search, alerting Holly, Peter Entwhistle and Marigold that they were going.

And soon the six-strong party were on the way to Dundraville.

By the time they got there, Bothwell's other son had admitted that he had 'double dared' his older brother to visit the haunted house in the hills beyond the Skulltop Hillock (where the ogre's lair had been).

The house had once belonged to a famous adventurer, Jerol Of Jirrey, but had fallen into disrepair after he died 40 years ago and no-one had been brave enough to venture there since as - as well as the ogre - they all believed it was haunted.

Guided to the bottom of the trail by the frightened villagers, by the time Cobblethwaite's Companions reached the house it was pitch dark, but they managed to find a trail through the overgrown grass between the manse and its curtain wall.

They followed the trail round to the back of the house, coming to a broken window where a small spot of blood was seen - the boy, Kennet, had cut himself on the glass getting in, making his trail inside easier to follow. 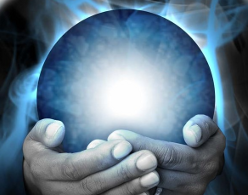 Cautiously they made their through a number of derelict rooms, following Kennet's trail, and calling out to him. Searching one room, a parlor of sorts, Davian found a 6" glass sphere, with a smokey interior, that he immediately wrapped up and put in his backpack.

In the manor house's tower, the group found a collection of old maps, some of which they thought might be worth something, so they pocketed those, but were generally pretty single-minded in their desire to track down the missing child.

A staircase in the tower led into the basement, and there the group found their first clues that Kennet wasn't the only creature in this building - there were a mixture of non-human (possibly monstrous) footprints before the trail disappeared completely.

In a wine cellar, Marigold siphoned off some mead-like substance from one vat labelled "Joy Juice" with the idea that she would study it later and then the party came into a looted armoury, where their attention was drawn to three precious stones embedded in the wall, with a cryptic verse underneath.

Cracking the code, they pressed the stones in the correct order. There was a click and the outline of a concealed door appeared.