Chapter Six: Who Let The Pigs Out?

Our heroes - Davian (Kevin), Kirchin (Pete) and Harry (Simon) were enjoying breakfast with Harry's new friend, Imogen (Meredith) at The Golden Axe in Bendwyn when an old friend of Davian's turned up, sicky Paco, with a tale of misery and woe.

Just days before the tax man was due to turn up and collect his regular dues, a wandering monster had taken up residence in Paco's small salt pit - preventing the miner from working his claim.

The party, naturally, agreed to help Paco out and he produced a hastily scribbled (vertical) map of his mine that they could use for reference.

He warned them about one tunnel that partially collapsed and another that flooded and pointed out where his equipment was stored (rope, lanterns and oil), which the group were free to use.


Having made the 40 minute walk to Paco's home - the salt pit was a short distance from his house - Kirchin gave Paco some silver to take his wife, Gwen, and their two young children (Owen, 4, and Pip, 3) to stay at The Golden Axe for a couple of days.

Our heroes inspected the claw marks on the house and the damage inflicted on the entrance of the mine before carefully descending into the pit and beginning a methodical search of the place.

There were definite indications that something had been living down here - animal bones, large mounds of foul-smelling excrement and collections of shiny trinkets.

Davian dislodged some rocks venturing into the collapsed tunnel, but luckily they bounced harmlessly off his armour, then just as the party was making plans to leave "Tunnel Number Two", a  creature sprung out of the shadows onto Kirchin's back, grazing him and forcing him to fall to the floor.


Imogen rushed in to save her new friend, stabbing the beast and then Davian stove its sightless head in with well-aimed blow by his hand-crafted mace.

The battle was over in an instant and the party could have chosen to leave at that point, but they weren't wholly convinced that the creature was alone down here and so decided to check out the flooded corridor.

And this is where things went horribly wrong!

Kirchin took a lantern and Davian's collapsible rod and tip-tapped his way up to the edge of goopy, gray lake of sickly salt water... and then the edge collapsed and he disappeared under the water. Davian secured a rope around himself and raced into the water to rescue the group's resident healer - leaving Imogen and Harry to hold the rope and pull him out once he'd got Kirchin.

But things didn't go exactly according to plan - especially when Davian realised that trying to climb back out only caused chunks of wall to crumble away in his hands.

The end result was that Kirchin nearly drowned and Imogen only managed to eventually pull Davian back out the water when Harry started singing a rousing tune to boost the group's morale.

At this point, the group decided to retire back to Paco's house, have a meal, dry off and see if any more creatures appeared.

Resting up over night, they opted to use one of Paco's two remaining pigs (the creature had apparently eaten the rest of his livestock, so Paco had moved his last two pigs indoors to keep them safe) as a 'guard dog'. Unfortunately in the middle of the night, the pig escaped and disappeared into the woods with a gleeful squeal.

After that, the party took turns sitting guard outside the house, with Paco's last pig for company and keeping an eye on the trap that Imogen and Harry had set near the mine entrance.

Nothing came that night and so the party returned to The Golden Axe and updated Paco on what had occurred in the salt pit.

Although he'd recovered the errant porker, Kirchin told Paco he would buy him a new pair of breeding pigs. They also agreed that the group would return to the trap they had left every day for the next three days to see if another creature showed up and they would help Paco haul out the three baskets of salt he needed to pay his taxes.

However, returning to The Golden Axe on the third day, they were met by Sir Browyrd, The Sheriff Of Dranning (and tax collector), who angrily announced that the taxes he had collected so far had been stolen by that notorious bandit Margesh Blackblood (dah-dah-dahhhh!)

Browyrd was offering a reward of 150 silver pieces for the capture of the bandit (alive, so he could stand trial) - with 100 silver piece bonus for the retrieval of Blackblood's sword, The Sword Of Aquin, which his master, The Duke, had his eyes on. 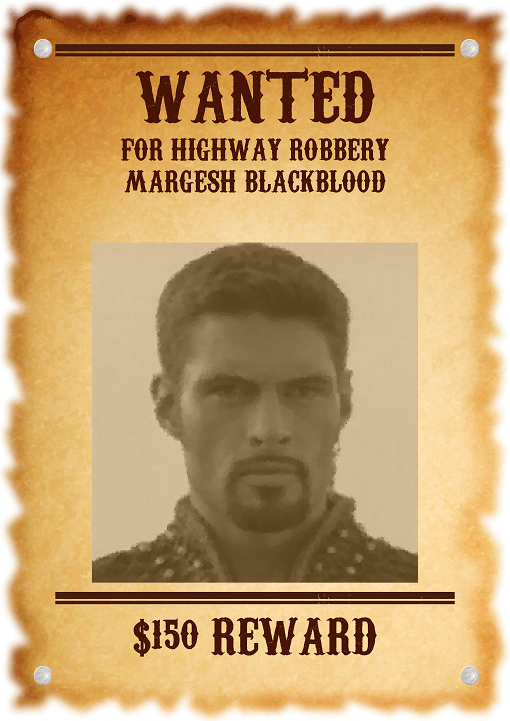