Chapter Twenty-One: Siege Of The Welcome Back Inn...


For as long as Cidri continues to revolve, the bards will sing of the heroic defence of The Welcome Back Inn by the adventuring group known as Cobblethwaite's Companions.

After two weeks of travel through the Badlands, the party had rolled up at the inn, just over the border in their homeland of Elyntia. It was the night before Halloween, the night of the blood moon, and young Marigold seemed to be about to give birth, frightening early (although the latter stages of her pregnancy had been supernaturally accelerated).

They were greeted enthusiastically by landlord Tristiam Weed.

Marigold was rushed to a bedroom upstairs, accompanied by Holly and Tristiam's wife Annabelle, while the menfolk remained in the bar, chatting with the tavern owner, swapping yarns and quaffing a few ales. Sasha, Tristriam and Annabelle's daughter, was sent upstairs with drinks for the 'midwives'.

There was a knock at the front door of the inn and Tristriam asked Davian to answer it. Peering out the dwarf immediately realised the "small child" on the doorstep was a goblin in a very flimsy disguise, who lunged at him with a knife, screaming: "For The Queen Mother!"

More worryingly, as he stove her head in, the dwarf noticed a wall of goblins approaching the isolated tavern from across the neighbouring pumpkin patch.

The adventurers immediately went into action, with Davian dragging a bench across the front door to block it, and Kirchin - unslinging his bow - racing up to the birthing room, where he started to take potshots at the charging goblins, while his brother, Dirkin, went to the opposite corner of the inn's first floor and set himself up to open fire with his own bow.

Harry's job - and it would prove crucial - was to boost morale with his incredible singing voice.

Tristriam was too slow getting to the back door, and ended up being knocked off his feet and down into the cellar by a contingent of goblins that got in that way.

As the battle raged all around, goblin bodies started to pile up (a couple were even felled by the primitive explosive weapon they'd planned to use to blow a hole in the inn wall).

Having screamed a tirade of abuse out the window at the gathering goblins below, Marigold found herself increasingly incapacitated by the contractions of her unnatural birth (at one point, she appeared to be ejecting smoke from her nether regions, before the pain got too much for her).

Despite the rain of arrows from the brothers Dirkin and Kirchin, a few goblins got into the inn.

While the near-indestructible Davian vented his goblin-hating bloodlust on pulverising as many as he could, Holly bravely took others on with her lightning fast rapier. Boosted by the tunes of the team's bard, every sword thrust found its mark - but unfortunately quite a number of goblin sword strikes also found their mark on her.

Nearing death, Holly was able to pull herself back up the stairs, where Annabelle did what she could to bind Holly's wounds (as the unnatural nature of Marigold's birthing process was putting the fear of the gods in her).

The last goblins died to the last arrows from Kirchin and Dirkin, who had moved onto the balcony over the main hall and had been picking off the greenskins that had gotten inside.

Had any more goblins decided to attack, the brothers would have been forced to engage them in hand-to-hand combat, alongside their comrades, as they were out of arrows for the moment.

However, the feared next wave of goblins never came, giving the adventurers time to regroup.

Davian found Tristriam alive, but bloodied, in the cellar, next to the corpse of the goblin he had killed, as Dirkin went round the corpses inside the inn retrieving any unbroken arrows.

[This was the end of Tuesday night's game session, the rest now is 'colour'] 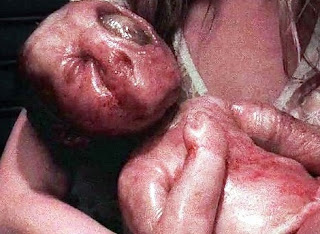 Sasha screamed even louder than Marigold as the twisted, tentacled creature was birthed into the world.

Instinctively she picked it up, cradling it, but simultaneously she was shaking with fear at the distorted and disfigured face and the tentacles that served as its legs.

Marigold had passed out, but even the battle-hardened Kirchin was repulsed by the creature. And all he could think was: "It's still growing!"

Holly and Annabelle cowered in the corner of the room (Harry stuck his head in, then immediately retreated in fear back out onto the balcony where he had been singing his rousing tunes, his mind racing back to the time they had all been 'cast adrift' in the strange hut of the Witch Of The Woods and their estranged companion Imogen had come upon a baby's crib. She had looked inside and fainted, never able to articulate what she had seen, but Harry now suspected he knew).

Before anyone else could get to the room, the Eldritch creature was already about five or six feet tall, and with an inhuman hiss, and snake-like movements, it propelled itself out of the window, scuttling down the wall and disappearing out across the fields towards the waiting goblin army.

Even as it slid/strode through the pumpkin patch it continued to grow in stature, while wisps of mist solidified around it into flowing yellow capes and a featureless mask that settled over its face.

Eventually, with the goblins around its legs/tentacles, The Yellow King disappeared over the horizon and - for the moment - was gone.

An eerie silence fell upon the inn, broken only by the sobbing of Sasha, whose mind had splintered at the sight - and touch - of the accursed, Cyclopean creature.

Eventually dawn arrived and the strange, discoloured light of the night before dissipated, leaving death and madness in its wake.