Chapter Twenty: Knowing Is More Than Half The Battle... 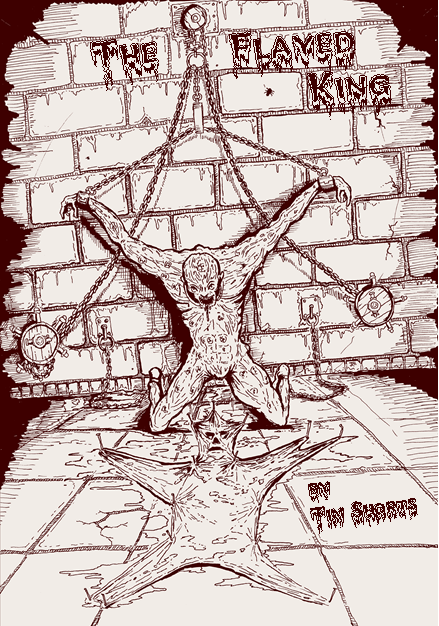 Frustrated that they hadn't found any "real" treasure yet - despite Dirkin's assertion that there "had to be" something down in the strange, copper-lined corridors of the Treasure House Of The Gods, Cobblethwaite's Companions debated their next course of action.

Eventually they decided to revisit the room with the rippling mirror, and Holly's magical doorknob revealed this to be concealed door into a chamber with a couple of chests that could be opened with metal rods they had found elsewhere.

From the chests, they retrieved two pairs of gloves. One pair of a leathery substance proved to be resistant to the lightning sparks that came out of the walls, the other pair - by trial and error - Kirchin discovered, by clapping them together, caused a random person in the vicinity to fall into a death-like sleep (that they could be easily woken from) .

When Marigold first collapsed there was a great deal of panic, but as the experiments went on they realised there was no great danger from the gloves.

Dirkin suggested they were revisit the room with the owl lanterns, but on the way they passed through the room at the bottom of the well shaft and noticed that under the rubble was a wooden board. Moving this they found a second well shaft, going down 100ft into a natural cave with more of the glowing water.

After sending Harry down on a rope they decided (once he was back up and told them of the corridor leading off from the cave) to just check the room with the owl lanterns again.

And they were surprised to discover that the lettering on some of the scraps of paper had changed into words they could read.

Marigold pieced the bits of paper together to reveal an ominous prophecy about the "Yellow King sailing from Kroatoa in a Virtuous Vessel", bringing death and destruction in his wake etc etc

As she thought about it, Marigold began to get increasing panicky, eventually wondering if she was the "vessel" and the child growing growing inside her was something to do with the Yellow King or something equally demonic.

Eventually, with everyone abseiling down into the newly discovered well, Davian the dwarf saw that the stonework beyond the cave was much older than that in the rooms above.

Exploring the small collection of rooms, the party battled a giant skeleton that nearly felled Kirchin (not helped that by the fact that their main fighter, Davian, had been blinded by a trap they'd set off and as the battle had unfolded, the dwarf has crashed into Kirchin accidentally knocking him out of the way).

While the bulk of the group recovered from the battle, Holly - fired up with enthusiasm after taking a magical ring from the giant - wandered into the room of utter horror!

The sight of a skinless man - his skin was pinned to the floor before him - shackled to the wall, made her scream loudly, attracting the attention of the others.

Having recovered her wits and combing the depths of her knowledge, Holly recalled the legend of the Flayed King (an arrogant king who'd sought to steal the knowledge of the Mnoren Gods and was twice cursed for his trouble, given all their knowledge and immortality, but chained forever in this place to answer one question from any brave enough to approach him).

While Kirchin and Dirkin were off searching another room (containing a replica sailing ship with a hold full of miniature gold bars), there was a lot of bickering over "what question" to ask The Flayed King.

Holly explained that, as she understood the myth, once the King had answered a question he deemed worthy, he would fall silent for a year, and anyone who tried to rescue him would be cursed to suffer the same fate.

At one point, Marigold made a break for it, determined to run into the room and ask the King about her pregnancy. Unfortunately when she got in there, the sight of him made her so tongue-tied giving Holly, Harry and Davian time to get to her and bundle her back out of the room before she could say anything.

Having dismantled the boat and taken the gold, the group put their heads together and eventually agreed that Marigold should be allowed to ask the King about her pregnancy.

The fleshless head spoke, telling her she was, indeed, carrying the 'Yellow King' and she was his method for escaping from Croatoa (the Mnoren religion's equivalent of Purgatory).

Deciding they had probably explored this 'dungeon' thoroughly, the party made their way back to the surface, to their wagon, and headed back towards Elyntia.

It was a three-week journey. The first two weeks - to the border - they saw no other living creatures. However, they did realse that Marigold's "bump" was growing at a noticeable rate - again freaking everyone out a bit (Marigold described the experience as being akin to "swallowing a bag of eels").

Crossing the bridge of the River Dart, that marked the boundary between the Known Lands of Elyntia and the Western Badlands, they arrived at the doors of the Welcome Back Inn on the night of the blood moon, with the night sky turning a peculiar mix of orange, red and blue.